Writing this on hot breezy morning in the Yucatán peninsula of Mexico, it’s hard to believe we were camped on the Pacific Ocean only two weeks ago. The coast of Oaxaca was beautiful, extremely hot, with powerful surf and beautiful little-developed coastline. We spent a few days in Zipolite, a small beach town on the central Oaxaca coast that has a fun hippie vibe. The days were so hot even the ocean could barely cool us off, but at night the town came alive with street vendors selling everything from horchata-mezcal drinks to homemade incense and jewelry. The food was cheap and delicious, and the people very friendly and laid back. We camped at a rancho a few blocks from the beach with mango, tamarind, lime and coconut trees surrounding our truck. Rio was by then fully adapted to the tropical lifestyle, having made small fallen coconuts her favorite new toy. The beautiful clear blue coves of San Agustinillo were also only a short moto ride away, with amazing swimming and snorkeling.

The central and southern coast of Oaxaca has a lot of places to explore, but the surfing is substantially more advanced than the places we had stopped up North. The currents and swell are a lot stronger, and some point breaks must be reached by boat. Because of our (lesser) surfing skills, and our desire to go kiting on the Yucatán peninsula sooner rather than later, we only made one more stop on the Oaxaca coast, at a beautiful off-grid surf camp north of Salina Cruz. The beach there, a 20 minute walk from camp, was absolutely incredible – endless white sand as far as the eye could see, with only a few surfers as evidence of human existence in the area. This area around Salina Cruz, the bigger port city on the southern Oaxaca coast, and the stretch inland from there called La Ventosa is notoriously windy at times. 50 knot winds and above rip through the area because the Isthmus of Mexico is relatively flat and provides a break for wind to rush through where it is blocked by the Sierra mountain range to the north and south. This phenomenon was clearly visible at the beach, with sand dunes equivalent to mountains rising up in the distance and incredibly expansive sand beaches carved by the wind and untouched by footprints. I definitely regretted not bringing my camera on our trek to the beach that day.

Also due to the wind situation, because the highway that crosses the Isthmus to the eastern side of Mexico becomes quite dangerous with the combination of high winds and large amounts of semi trucks crossing from the Gulf ports to the Pacific, we decided to cross the Isthmus the next day because the wind was due to return in a couple days. We ended up breaking our records for how long the truck can go in a day, and covered the approximately 600 miles to Progreso, Yucatán in two days of driving. There wasn’t much to stop for along the way, and mostly truck stops as the option for camping. However, the freeways we were on after crossing to the Gulf side of Mexico were way nicer and faster than what we had grown accustomed to, so that made the journey much quicker.

It has now been a full week here in Progreso, a port and beach town on the Gulf of Mexico facing almost directly North, only a half hour from the city of Mérida. More of a local-oriented beach town than the Cancun area, Progreso does however boasts the longest pier in Mexico and is frequented by cruise ships twice per week – although the ship goers don’t usually stray past the touristy malecón. We were greeted here by the friendly face of Ángel, the owner of Yuckite kitesurfing school, and we have been lucky to camp right at his kite school on the white sand beach. The kite community here is strong, with a lot of friendly locals who are passionate about the sport, many of whom are now instructing for the school as well. Kiters also come out from Mérida, and there are some expats from Canada and the U.S., as well as visitors learning to kite. We are fast approaching the hottest month of the year here, and it is pretty brutal. It often gets windy at 3 or 4 in the afternoon, so the mornings sometimes become survival mode as opposed to be-at-all-productive mode. However, the kiting is pretty sweet, with side-onshore winds at the shallow sandy gulf beach lasting past sunset, making for perfect sunset sessions – and no wetsuit needed! The wind in the morning is sometimes strong but offshore, which is when the kite crew heads to “La Ría,” the brackish lagoon/river mouth surrounded by mangroves only 15 minutes away on the other side of town, with fun flat water conditions. The kiting here reminds me of South Padre Island, Texas where we first learned to kite, although the beach and water are more beautiful here in my opinion. Our plans are pretty up in the air as to what and where is next for us, but we are enjoying the Yucatán life for now! 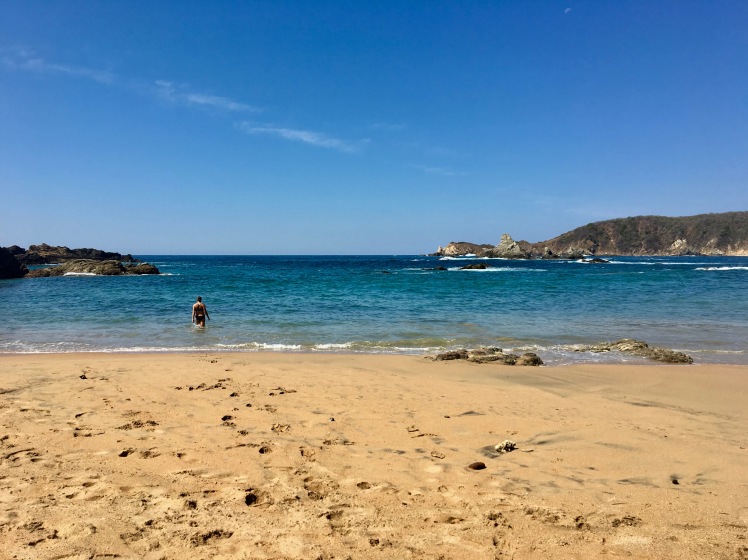