It’s August and we’re officially in the Southern Hemisphere! This was our third time in Ecuador, but our previous visits were both in November-December. Despite being an equatorial country, the seasons are still somewhat distinct – it was the drier, cooler season on the coast this time, as well as the general off-season for surfing. We were warmly welcomed to Ecuador with a stay at Finca Sommerwind, a popular overland campground near Ibarra in the Northern Andes, run by the friendly German Hans. Besides enjoying fresh bread, good German beers, and the cool climate we were also able to get a few things done on the truck. Rio also discovered a new found love of swimming in the lake there, egged on by large numbers of marsh birds to be chased.

We soon felt the coast calling our names, and we headed out on a route we hadn’t taken before, winding down the Andes near the Colombian border to reach the far Northern coast of Ecuador. We spent the next weeks exploring coastal towns and areas both familiar and new to us (we drove down a good portion of the Ecuadorian coast in our VW Kombi in December 2016). The weather was overcast quite a lot of the time, apparently typical to the season, but the temperatures were lovely and we were happy to be breathing the Pacific Ocean air for the first time since we left Mexico’s Oaxaca coast.

After stopping for a Paragliding session – for Mitch – in Crucita, we cruised down to the main kiting spot of the Ecuadorian coast, Santa Marianita. Located just south of the larger fishing port city of Manta, Santa Marianita is a little seaside village at the bottom of big desert bluffs facing almost directly north. We announced our arrival at our camping and kiting spot by promptly getting horribly stuck in the sand there. This turned into a two-day removal project due to a combination of bad recovery decisions, a very heavy truck, and a lack of large machinery to pull it out. However, we gained new friends, a good story, and learned lessons – the most important one being not to drive onto deep sand – in the process.

With renewed spirits and sore backs from shoveling, we had a great couple days of wind and enjoyed long kiting sessions out on the Pacific, with whales spouting and surfacing in the distance. This is mating season for humpback whales off the coast of Ecuador, and we were lucky to able to witness it. The waves were small but fun, and the temperatures perfect: not too hot, but warm enough for no wetsuit! After a relaxing stay at Humboldt Kites – a name that reminded me of home! – we headed south again to meet a friend in Montañita. Guillermo is on a motorcycle trip from Patagonia to North America, with his awesome Patagonian shepherd dog riding with him. Some fun times kayak surfing, paragliding and camping were had, and then we decided to move on to Perú. Our last night in Ecuador we camped in a nature reserve near the Peruvian border, in a very interesting dry flat forest landscape. Ecuador’s national parks and nature reserves are free to camp in, and we met a whole group of overland travelers at our camp from all over the world. Ecuador is an amazing country, with a coast to Andes to Amazon jungle trajectory in an incredibly short distance, along with impressive infrastructure and very friendly people. We will undoubtably be back in the future, as we have many places to both explore and revisit. 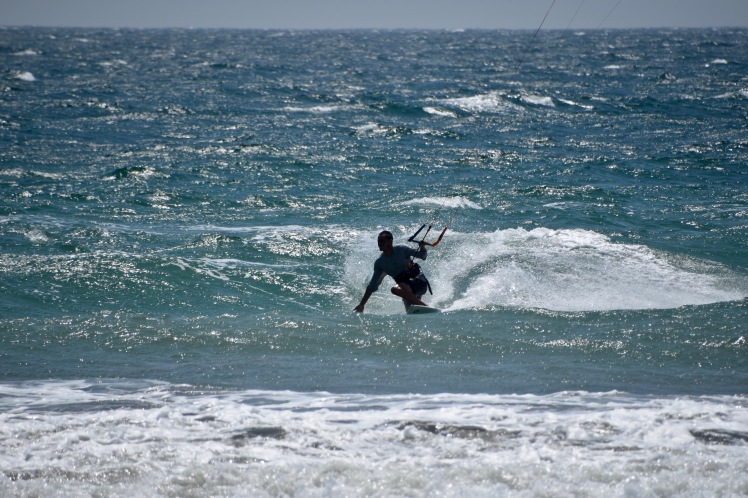 One thought on “New Adventures in Ecuador”