Our first month – and first half – of Peruvian truck living flew by. We celebrated our successful border crossing with a delicious Peruvian ceviche, the first of many tastes of the cuisine which rarely disappoints. Our first stop was Máncora, a fairly busy and touristy surf town on the far northern coast. Unfortunately the normally extensive beach had been mostly eaten up by the ocean right before we arrived, but we still enjoyed the nice long board waves and a few days of good wind for kiting. However, the crowded scene soon had us looking for a more ideal camping location, which we found just an hour south in Lobitos. Formerly a US Military Base during WWII, now a mostly deserted ghost town apart from a small surfing community and an extensive on- and off-shore oil extraction network; it was one of the strangest, most beautiful places we had ever been. We quickly made ourselves at home next to the very chill surf hostel above the piscinas wave, around the point from the main part of town, and stayed for 10 days. The landscape was desolate but there were plenty of activities and natural beauty abounded. We explored networks of dirt roads on the moto and found huge beaches with good kitesurfing and not a human in sight. Just in front of camp was an awesome left point break, sometimes with nobody else on it, and even with the occasional sea lion popping around. Empty flat beaches went on for miles in both directions, making for perfect beach runs for Rio and I, and the sunsets were amazing. We stayed through Mitch’s 25th Birthday, which he spent carving some waves, stepping up the game with his shorter board.

Eventually we decided to head south, but it was tempting to stay. The climate on the far northern coast of Perú was pretty ideal: sunny and warm all day, but not too hot, and cool at night. We knew that as we went south, the climate would cool considerably. However, the famous longest left-hand wave in the world was calling our name, and after a long driving day we arrived in Chicama. The first night we drove out on the bluff overlooking the surf waves and camped there. It was an absolutely epic spot, but the wind was so strong that it wasn’t a very livable camp, and we planned to stay for a while. Luckily, Chicama had an amazing new boardwalk, only a year old, that also included a beach road area with picnic tables that are free to camp at. It was one of our favorite beach camps to date, and with the cooler temperatures we enjoyed driftwood bonfires almost every night. The surf was unlike anything we had every seen – lines of waves coming in like ripples, breaking so far as to need an aerial view to see the entire wave. We didn’t experience a true Chicama swell during our week there – the type that produces 2 km long rides – but the surfing was still pretty amazing.

After leaving Chicama, we stopped for a couple days in Huanchaco, the bigger beach town just outside the northern Peruvian city of Trujillo. We had visited here once before while packing for our Marañón river trip in December 2016. While the town is a bit big and crowded for our taste, it was a good opportunity to stock up at the local market before our next drive South. Yesterday we had a long driving day and camped just north of Lima in a Natural Reserve called Lomas de Lachay. It was a fascinating area – the Panamerican highway parallels the coast with a basically unchanging landscape of endless desert and sand dunes, but nearing Lomas de Lachay the elevation rises and a fog layer appears, creating a microclimate not far above sea level where moisture is trapped and the hills are bright green. Technically it is Spring down here in the Southern Hemisphere, and fields of wildflowers were in bloom on the way into the Reserve. It was a beautiful and peaceful place to camp for the night, only around 5 km off the highway but with a totally different landscape. Refreshed, today we braved our crossing of Lima, the biggest city we have yet to drive through on our travels (and the third biggest in Latin America). There is a section of road before Lima on the desert mountainside above the ocean called the “devil’s curve” because of the dense fog and dangerous road, but luckily we made it through, as well as through the city of population 9 million that followed. Just like that, the first half of our coastal Peruvian adventures concluded, and we may have found our new favorite coastline in the process. 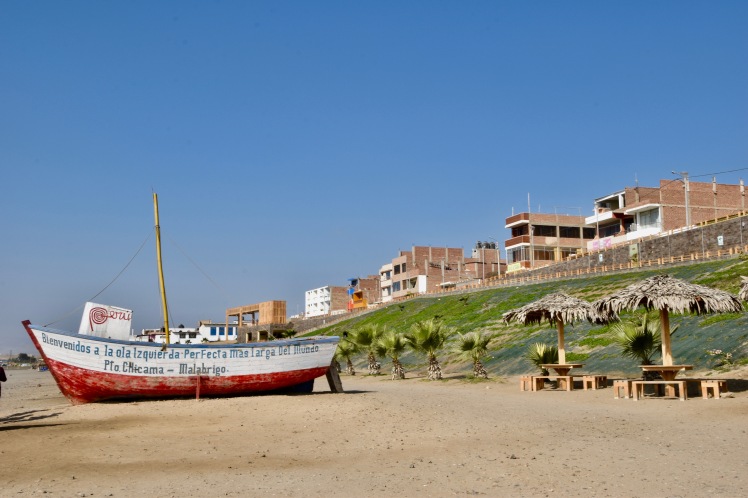 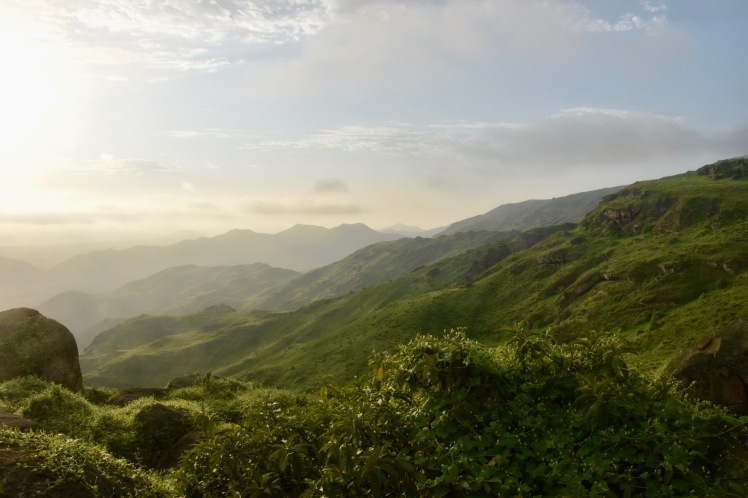 One thought on “Peruvian Coast Part 1: Desert and Waves”